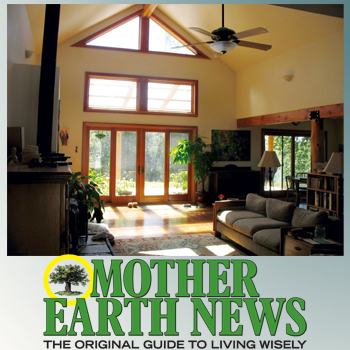 For the June/July 2012 issue of Mother Earth News David wrote an article titled “Passive Solar Design Basics.” This article discusses the ins and outs of Passive Solar Architectural design for buildings. It is interesting that the term Passive Solar was first coined in the living room of David’s new solar house built in Santa Fe in 1973. He was celebrating the completion of his classic Passive Solar design with three other solar pioneers; Steve Baer of Zomeworks fame, Herman Barkman and Benjamin (Buck) Rogers from Los Alamos Scientific Labs who had helped with the engineering of the house. David asked the rhetorical question “What kind of architecture is this design that heats and cools itself naturally”; Buck answered “ In mechanical engineering we call systems that use man-made energy to work ‘Active Systems,’ and those that don’t ‘Passive Systems,’ so I guess this is “Passive Solar Architecture.” The term went on to be used around the world and in 1978 David wrote the book “Natural Solar Architecture: A Passive Primer” which was reprinted as “The Passive Solar Primer: Sustainable Architecture” in 2008.

Today Passive Solar Design is the basis of all energy efficient architectural design. It is the basic physics of designing using; the natural role of the sun, microclimate conditions and the laws of thermodynamics as they affect buildings. Of course this technology has been understood and practiced for thousands of years in civilizations like China, Persia, Egypt, Rome and Ancient Greece; we simply ‘rediscovered’ and adopted these concepts in the 1970s when the ideas of finite energy resources and sustainability became important to our civilization. As an early adapter David compiled and expressed these ideas for other people and professionals to better understand and use in the design of buildings.

You can find the article here: Passive Solar Design Basics.