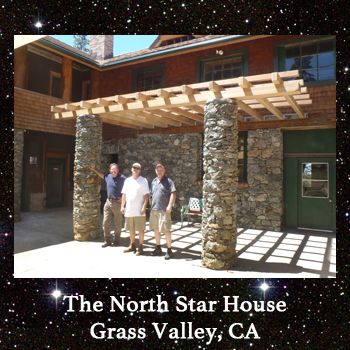 The North Star house in Grass Valley, CA is an 11,00square foot mansion designed by the internationally heralded architect Julia Morgan. Built in 1905 the house is now listed in the National Historic Register, after having been “lost to history” for over 50 years. This was built for Arthur De Wint and Mary Hallock Foote the famous mine engineer and his author-illustrator wife. This house was Julia Morgan’s second architectural commission and is an outstanding example of the early California Craftsman Style architecture. It was “lost” because after it was built, Morgan’s drawings and records of the project were destroyed in the 1906 San Francisco earthquake. The only record of the project were the memories and blueprints retained by the Foote’s when they were alive; after their passing what was left of the blueprints were donated to the archives of the Empire State Mine Park by their estate and a few drawings retained by their heirs. The house was abandoned fell into disrepair in the 1960’s when the remaining family lost ownership. Many additions and remodels were done in the period that it was a home for wayward boys.

In 2006 the house was donated to the Bear Yuba Land Trust by a developer who planned to develop the entire 700 acre Former Empire Mine property. The Land Trust formed the nonprofit North Star Historic Conservancy to manage and operate the 14 acre property and North Star House. Since then the Conservancy has rescued the house which was about to collapse because of the deteriorating roof; much has been done clearing tons of debris and removing much unfortunate work done in the interim.

Today, the NSHC is beginning to allow the public to use the house and grounds for a wide range of events and performances. The goal of the Conservancy is to create the premier historic cultural arts venue in Nevada County for the community. David is an early member of the Conservancy Board of Directors, Site Architect and Chair of the Planning Committee. He has designed and coordinated the construction of public restrooms for the grounds, a renovation of the catering kitchen and interior restrooms, and a site signage program suitable for an historic park. The house will soon be available for year round activities from weddings to concerts, and docents will offer tours for the public; these programs will help pay of the rehabilitation of the North Star House.

The repairs and improvements will go on for years to complete the estimated $6,000,000 rehabilitation. David and his family recently designed, constructed and donated the restoration of the courtyard pergola as originally designed by Julia Morgan, which was removed in the earlier unfortunate midcentury remodeling by others. David and the NSHC are working to restore the North Star House to its former glory as a cultural centerpiece of the community. Please consider helping in this important effort, and Follow the Star! NorthStarConservancy.org